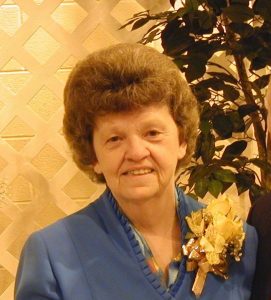 Hilda Jones passed away Thursday morning, September 7, 2017, just weeks shy of her 84th birthday. She was born to C.L. and Ettie Starling on October 10, 1933, in Johnson County, NC. Her family lived in Clinton, NC, until she graduated from Clinton High School in 1952, and her family moved to Newport News, VA, shortly thereafter. During this time in Clinton, she took advantage of some ‘confusion’ regarding her date of birth to begin work in a local store a year early. Indeed, her work ethic began early and continued throughout her life. Soon after arriving in VA, Hilda obtained work in the Base Supply office at Langley AFB. Also, her family became members of the Newport News Pentecostal Holiness Church, and Hilda joined the church choir. This decision had a far-reaching effect on the rest of her life, as it was at a choir practice later that year that she met Glen Jones, a young Air Force GI that was home on furlough. They ended up dating 26 days in a row before he had to return to Travis AFB, CA. A little over a year later, they were married on February 20, 1954, and immediately moved to Mountain Home AFB in Idaho. It was there that they recommitted their lives to the Lord, and began to work in the church. About five years later, after a few more transfers in the military, Glen left the military in 1959 to begin a new career as a minister. Together, Glen and Hilda pastored a number of churches, first in Arizona, then California, and finally in Virginia, pioneering three new churches. Throughout this period, Hilda maintained her work ethic, serving faithfully as a pianist, women’s auxiliary leader, and Sunday School teacher, as well as anywhere else she might be needed. Indeed, her commitment to God’s calling to be a Sunday School teacher remained strong throughout the rest of her life, even after she had to retire from teaching after over 53 years. She loved studying God’s Word and sharing it with others. She is preceded in death by her parents, C.L. and Ettie Starling, and two sisters, Mary Broughman (and Dana) and Betty King (and Joseph), and is survived by Glen Jones of Newport News, her loving husband of over 63 years, her sons Mike Jones (and Denise) of Newport News and Tom Jones (and Juanita) of Yorktown, six grandchildren, and two great-granddaughters. She is also survived by her sister, Joyce Parnell (and Carl), and brothers Norwood Starling (and Jerry) and Glen Starling (and Linda).